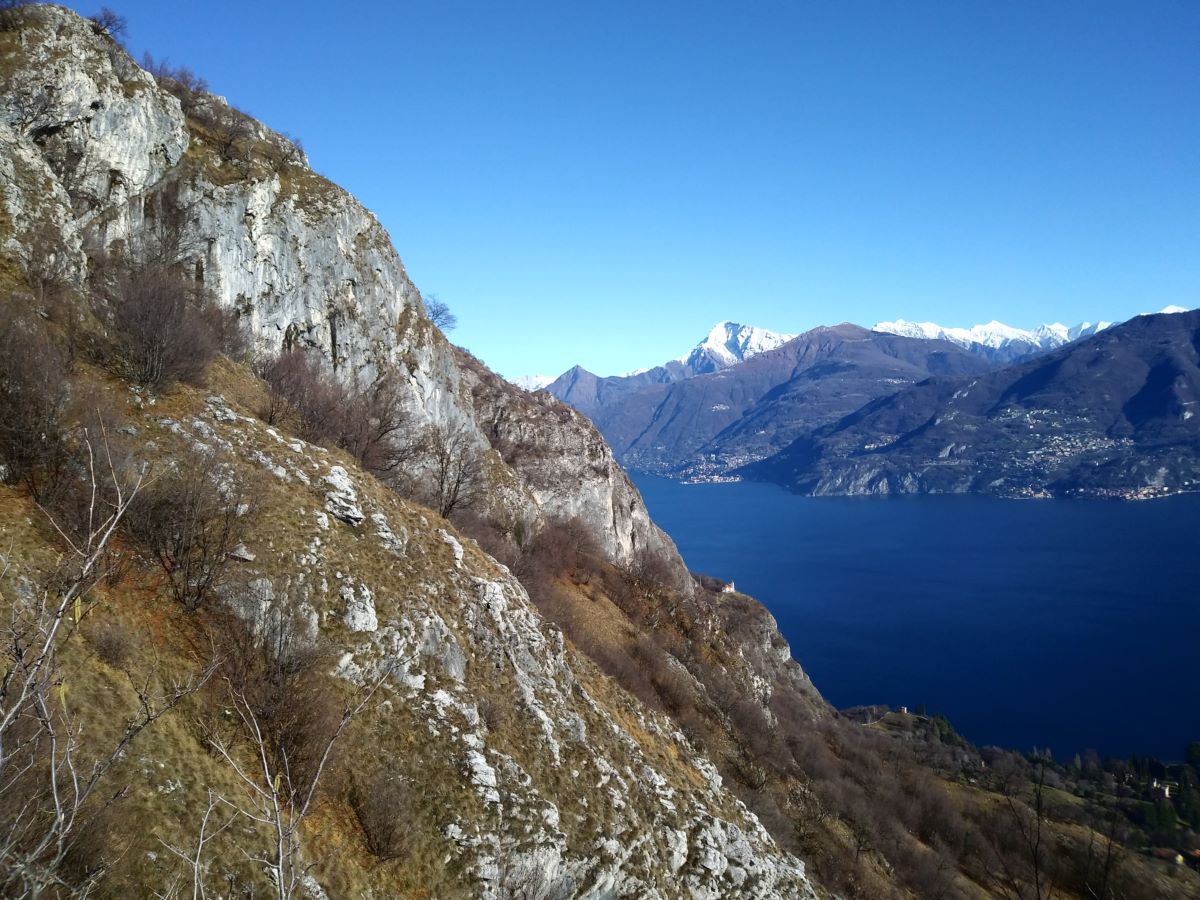 This splendid circular walk, which you can start directly from Menaggio, leads to La Crocetta and then continues to Sasso San Martino from where the wonderful view embraces a large part of Lake Como. The area around La Crocetta and Sasso San Martino was part of the Linea Cadorna, the important defense line of the First World War as evidenced by the trenches,  the tunnels and armored positions you meet on your way. In order to shorten the itinerary by 40 minutes, you can reach the village Croce by bus or by car.

Take Via Calvi and, half way up the street on the right, you find the church S.Marta of the 16th century. Observe the interesting historical bas-reliefs on the facade of the church. One is a fragment of a Roman tombstone of Lucius Minicius Exorato, above it is a 15th-century effigy of the castle of Menaggio, which has become the municipal coat of arms.

At the end of Via Calvi is the parish church of S.Stefano of very ancient origins whose original Romanesque structures have however been lost.

Take Via Caronti on the left side of the church and, at the end of the street, turn right into Via Leoni and then, after 30 meters, turn left into  Via Castellino da Castello.  You ascend  to the medieval part of Menaggio. The “Castello” of today gives only a faint idea of how it was in the middle ages. It was destroyed during the occupation of the Rhaetian militias in 1523.

On the corner with Via Strecioum go up the long flight of steps to the left (Via Rezia). Pass  an underpass and then take Via Monte Grappa, which after 300 m leads on the main road 340. Cross it, then go up the steps and turn right onto the cycle-footpath that follows the traces of the former Menaggio – Porlezza railway line connecting Lake Como with Lake Lugano.

The railway line between Menaggio and Porlezza was opened in 1884 in order to attract more tourists from northern Europe to the area. Arriving by train to Lugano the tourists were then transported by steam boat to Porlezza from where the train brought them to Menaggio.

The track enters a valley and passes a 90 m long tunnel. At its end take the ramp on the left that leads up to the village Croce. From the parking lot, with view of the impressive walls of the former target shooting, walk to the main 340 state road. Go left and at the traffic lights cross the main road.

Pick up the Via Wyatt in  direction of the Menaggio and Cadenabbia Golf Club . Founded in 1907, it’s one of the oldest golf courses in Italy. After about 200 m you turn left into Via Pigato. Before arriving at La Crocetta you encounter the first trenches.

Monte Crocetta was part of the great defence line called “Linea Cadorna”, built in 1915 along the Swiss-Italian border, out of fear of a possible offensive attack from the North. The walkways have been restored and, if you wish, you can walk through them discovering the armored positions, the shelters for the troops and observation posts.

You reach the little chapel dedicated to San Maurizio built by the “Gruppo Alpini di Menaggio” to remember the soldiers that fell during the two wars. Inside the church there are two frescoes of the local painter Buno Azimonti. Below the church is a bunker that contains the Sacrarium where all the fallen soldiers from Menaggio are remembered. From the church you have a most wonderful view of Menaggio.

From the church follow the indication “Venini Refuge, Monte Crocione and Monte di Tremezzo”. You arrive at a trench. With a short detour to the left you arrive at La Crocetta, from where the view embraces the whole Central Lake area, the branch of Lecco, the Orobie Alps and to the North the Upper Lake Area and the Rhaetian Alps.

Retrace your steps and follow the signs in red paint on  rocks and trees until you reach a hut. Circle it and take the ascending path just before a tunnel.  You eventualy arrive at a clearing with the trail signs for Rifugio Venini, Monte Crocione and Monte di Tremezzo.

Further ahead you enter the cart track in direction of Monti Pilone which ascends in bends through the woods. Right at the beginning of the descent towards Monti Pilone, take the path that branches off to the left to Sasso San Martino. After a 10 minute ascent the path leads down to a saddle and then heads towards the far end of the Sasso (818 m). Enjoy the magnificent view in all directions.

You retrace your steps and descend to the Monti Pilone.  From here take the path that climbs in comfortable hairpin bends to  Monti di Nava. You reach a saddle and cross the Dossone. The path descends and then ends onto the cart track at Monti di Nava (885 m) dominated by Monte Crocione.

Turn right and follow a stretch of the Via dei Monti Lariani, a 125 km long trekking route that connects the mountains on the west side of the lake. You cross splendid chestnut woods and descend along the steep cart track to the church of the Madonna di Paullo. Here you reach the paved road, which you follow to the left and after 50 meters you take a path that descends to the right. It crosses  the paved road twice as it leads back to Croce.

Croce is the highest in elevation of the villages that are part of the commune of Menaggio and lies at the beginning of the Val Menaggio. It has a rural historic centre characterized by a typical little square of the 16th century. On its slightly raised surface the rituals of haymaking, of the harvest and the threshing, took place.

Parking possibility at Croce in Via San Rocco. 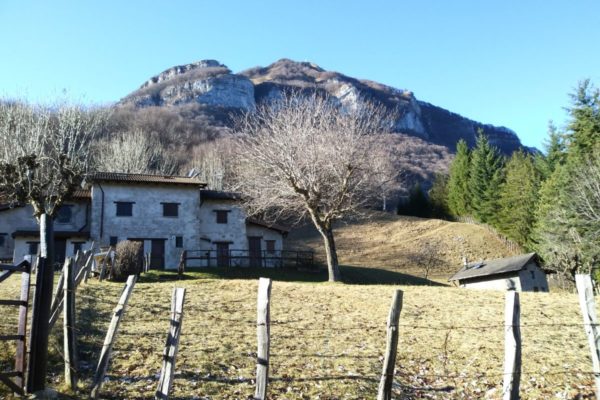 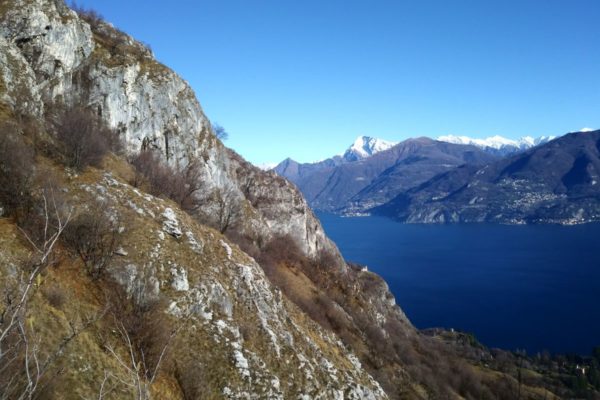 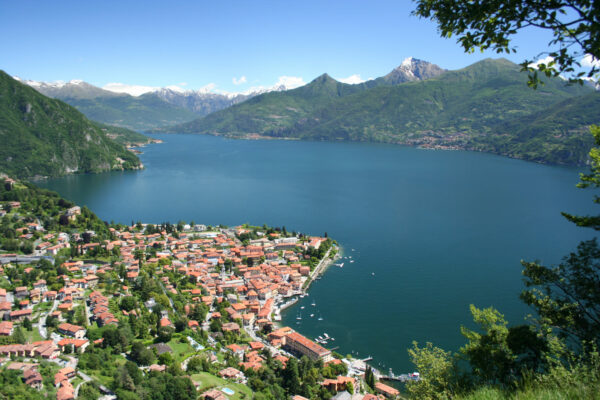 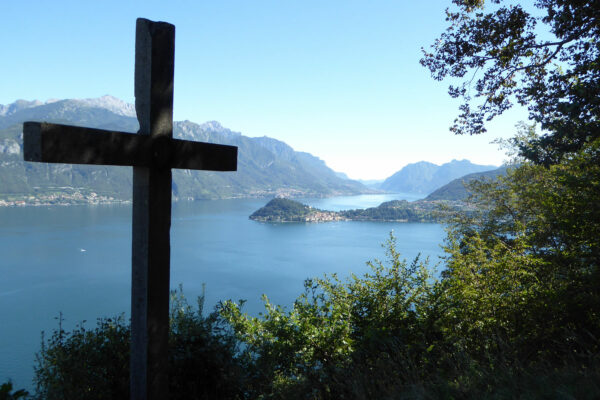 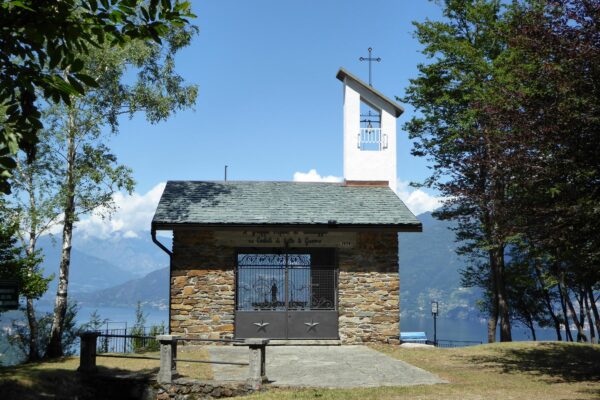 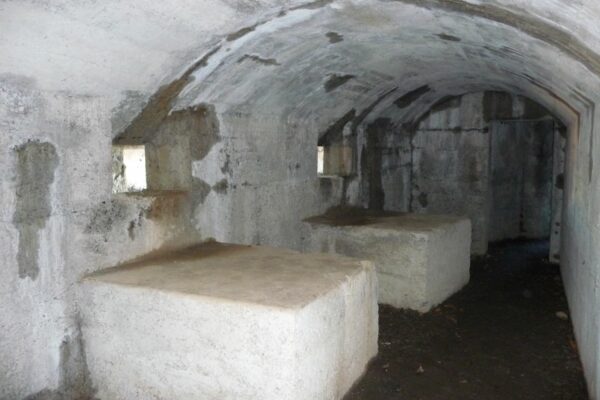 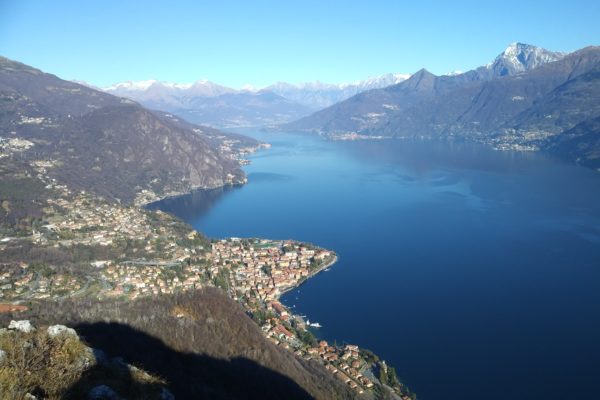 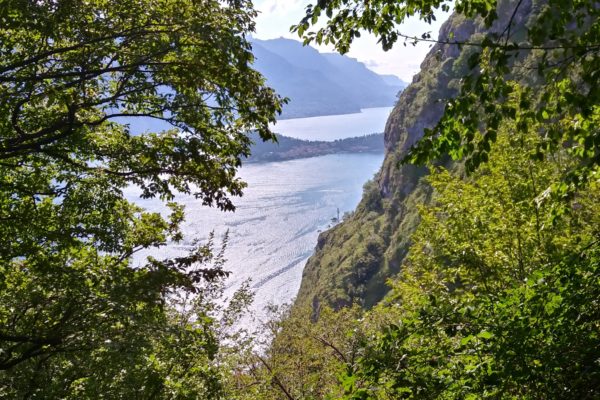 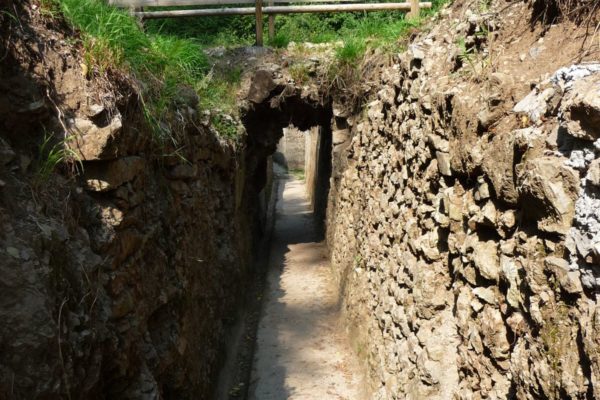 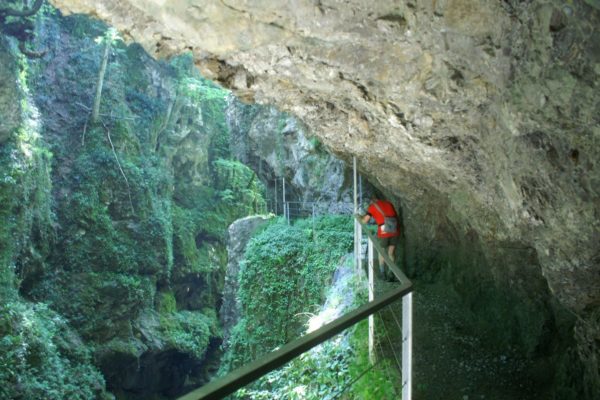 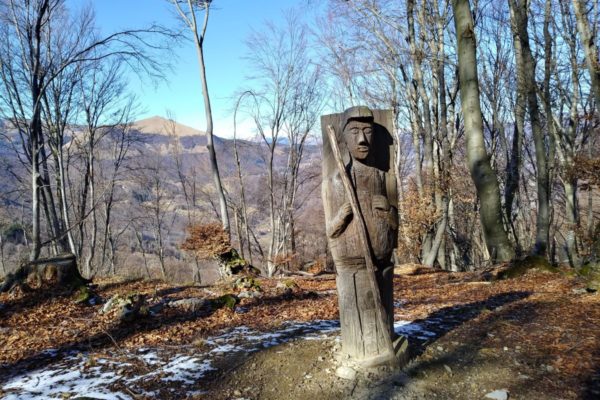 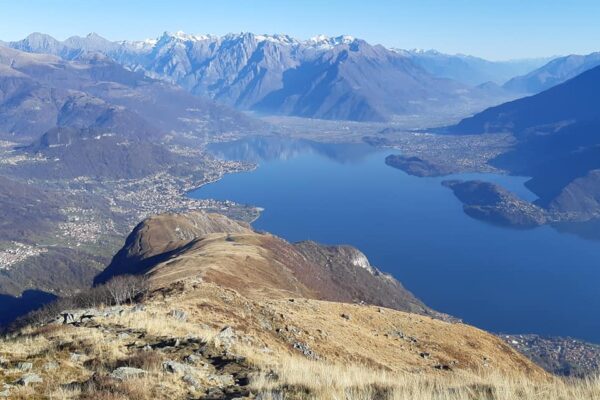 From the top of Monte Bregagno 2107 m you can enjoy a spectacular view of Lake Como and the surrounding peaks. The enchanting panorama will make you forget the length and steepness  of the hike.